Practice Structures: Draw What I Say

Draw what I say is an activity where students can practice using vocabulary.  It can also be used to practice reading and writing mathematical notation.  Here are the rules for this activity:


I have used this activity several times and students always have a good time.  Here are three version for you to try.

Grade 3 Multiplication Arrays
Grade 7 Geometry Vocab (I did not create this one; I found it here)
Algebra 1 Set Theory and Venn Diagrams
Posted by Unknown at 12:25 PM No comments:

One of the practice structures that I like to use to improve vocabulary is Taboo.  Here are the Directions from Hasbro for the official game.  Basically one player tries to get their teammates to guess as many vocabulary words in a given time as possible.  The player chooses a card with the vocabulary word on it as well as several other words that are 'taboo.'  The player gives verbal hints to the vocabulary word but can not use the taboo words.

For example, the player would give clues to have their teammates guess the word monomial, but they can not use the clues: polynomial, one, term, or variable.  Maybe they would say "single addend" or "you find the degree by adding the exponents on non-numerical bases."

I think this game works best as a review after a very vocabulary heavy lesson or unit.  It forces everyone to think of synonyms or descriptions beyond what may have been given in the notes or in the textbook.

My favorite way to use this activity is to have students create the taboo cards.  I give the kids about 5 minutes to review the unit for vocabulary words to create their own game card including the taboo words.  I have each student put their vocab word and taboo words on a quarter sheet of paper and fold it in half.  Then as a class we play using the student generated word by pulling the cards from a shoe box.

Here are three versions of the game that I have created.  If you try any of them, please share your feedback.

This year I've taken on the #teach180 challenge.  The challenge is to post one tweet per day showing a glimpse inside your classroom.  I'm also putting the tweets together in a biweekly blog so that I can share the resources that I'm tweeting about.


Day 171:  Today we had our second to last weekly cumulative quiz!

Day 173:  Today in algebra 2 we practiced using conditional and biconditional statements with this board game assignment.  It was also the last day of class for seniors (I have 2-4, depending on which ones end up graduating) so it was a hectic day.  One more week of classes for underclassmen.


Today in #alg2chat we practiced using conditionals with a board game #teach180 pic.twitter.com/pAVUJ46yJj
— Jennifer Abel (@abel_jennifer) May 26, 2017

Day 174:  Today in geometry we reviewed the relationships between congruent chords and arcs within circles using this ExploreLearning Gizmo.


Today in #geomchat we practiced using the relationships between congruent chords/arcs/angles in circles with @ExploreLearning #teach180 pic.twitter.com/L78bQm7pz3
— Jennifer Abel (@abel_jennifer) May 30, 2017

Day 175:  Today in algebra 2 we practiced determining whether or not 2 statements are logically equivalent using this worksheet.

Day 177:  Today was our last day of classes.  I collected books and returned old quizzes.  Students cleaned out their lockers and continued reviewing for final exams.  I also had some fun puzzles available for those kids that were feeling burned out.  One hopeful senior spent a full seven hours in my room today (and two hours yesterday). She had a rough year and made some bad choices but she earned a passing grade today and will walk with her classmates next week.  I'm not sure whether she learned not to procrastinate or that people will extend deadlines and go above and beyond to help you if you make poor decisions.  I hope for the former.

Day 178:  Today my algebra 2 students took their final exams.  They also took English exams.  While I was not grading or proctoring test, I was packing up my room for summer cleaning.  I also started meeting with teams to discuss and plan for next year.

Day 179:  Today my geometry students took their final exams.  They also took their history exams.  In between tests, when I needed a break from grading, I moved my teacher desk and filing cabinet.  After the last exam tomorrow, I'll start setting up my student desks (trial and error) to see how I might set things up for next year.


Today my geometry students took their final in another room. My room isn't being used again until tomorrow so I moved my desk #teach180 pic.twitter.com/k8jkpAQFt4
— Jennifer Abel (@abel_jennifer) June 6, 2017

Day 180:  Today I proctored exams for science and continued to grade my students algebra and geometry finals.  I also played with various furniture arrangements to assist in my plan to incorporate hyperdocs as we go 1-1 next year.


Proctoring a science final today. Then lesson planning with teams for next year and finishing up some grading #teach180 pic.twitter.com/T7VALiG9re
— Jennifer Abel (@abel_jennifer) June 7, 2017

Day 181:  Today is our official last day of school.  I worked on packing and un-decorating my room as well as finalizing grades for the year.  I also had some time to start brain storming for the summer PD sessions I'll be facilitating on digital assessment.


Experimenting with room arrangement for next year on my last day #teach180. I think this is the winner, what do you think? #MTBoS pic.twitter.com/6wWyJhLYZH
— Jennifer Abel (@abel_jennifer) June 8, 2017

What a ride this year has been.  At the start if the year I thought I'd never remember to tweet a picture from my class each day.  But I managed just fine.  I think the biggest benefit was that I've been pushed to create better lessons this year.  If for no other reason that I knew I needed to do something tweet worthy each day.  I'll definitely be doing #teach180 again next year.  I hope you'll join me :)
Posted by Unknown at 7:21 AM No comments: 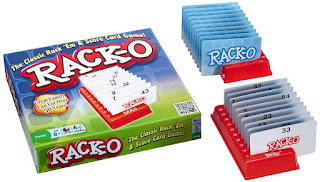 I'm always on the look-out for ways to make practice and fluency building more engaging for students.  After hearing about other activities where students order values from increasing to decreasing order, I remembered playing the game Racko.  In Racko, players try to organize 10 cards in increasing order.  The cards are numbered 1-60 and are originally arranged in random order.  Players have the chance to switch-out one card at a time until they are all in order.  You can read more about how to play to actual game here.

My idea is to replace the original cards in the game with math problems.  The rules remain the same.  I have not tried this in my classes yet, but look forward to doing so.  I created three versions of the game that you can try in your classroom.  I created one for elementary school, one for intermediate, and one for secondary.  I'd love to see versions that you create as well.