I modified this activity from one done by Matt Vaudrey and John Stevens.  I believe that they used the activity to study Pythagorean Theorem and the distance formula.  Here is a write-up of John’s lesson.  I used it to have students practice solving simple trigonometric triangles involving angle of elevation.

I started the lesson with the same video that John did.  I asked the kids if they had ever been on a zipline and if so where.  A few kids had stories to share.  I asked them about what would make a zipline ‘good.’  This led them to the safe and fun metric.  They knew that the zipline needed to be both safe and fun if people were going to enjoy the ride.

I set up a mini zipline in my classroom.  The starting height was fixed at some random value because I already had a command hook stuck to one of my cabinets.  It was at about 147 cm.  The zipline was just fishing line.  I used a carabiner and velco meant to secure computer wires for the harness. 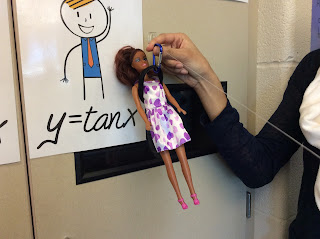 I had students choose a horizontal distance along the floor at which to tether the end of their zipline.  Then they did a trial run.  They calculated the lengths of the actual zipline with both the Pythagorean theorm and the distance formula and then calculated the angle of elevation from the floor to the top of the zipline.  Finally, they gauged how safe and fun their first trial was.  Using this information, they completed two more trials form the fixed starting height to determine the best angle of elevation for a zipline.

After they did this, I gave them two starting heights for the final zipline that they would perform in front of their peers.  One was a height for an inside location and one was a height for an outdoor location.  We ended up inside because spring weather can be unpredictable in central PA (we had 1.5 inches of snow yesterday). 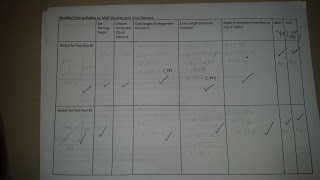 Each group of students worked backwards to determine where they should tether the end of the zipline based on their ideal angle of elevation.  Prior to our next meeting, I set up the final run complete with marks on the ground so that we would not lose too much classtime for all the measuring. 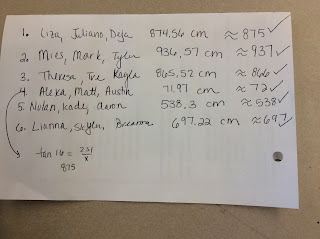 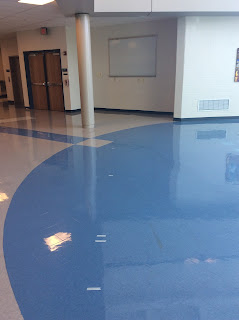 I had one group that did not solve their equation correctly and their zipline ended up more like a free fall.  I recorded their corrected solution in the event that they realized that they had made a mistake once they say all the other groups ending spots.  They didn’t, or didn’t care.

During the final runs, I had the other students rate their classmates zipline on how safe and fun they are using this document.  This helped to keep the kids focused when it was not their turn to do their run.

I also added a calculation on final velocity of the zipline ride.  I wanted to make the activity more STEMy, but I feel like I could do more.  Next year, I might have the kids time their trial runs, calculate the ending velocity, then have them calculate the acceleration using a=v/t.

Overall, this was so much more enjoyable for both the kids and myself that what I used to do to wrap up this unit.  That was writing their own word problems that used angle of elevation, depression, trig and inverse trig functions.

Posted by abelje at 6:32 PM No comments: