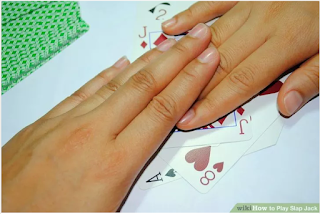 The next practice structure that I'd like to share is Slap It!  This is a variation of Slap Jack.  This activity works best for practicing skills where there are a limited number of responses.  I've created a version for identifying the center and radius of a circle from an equation and a version for identifying the sine, cosine, and tangent of angles.  I think this would also be a good way to practice evaluating simple logarithms or specific values on the unit circle.  I'd love to hear what you would do with this idea.  Please share any variations that you try.

Here are the rules for Slap Jack provided by Bicycle Cards :
Object of the Game:  The goal is to win all the cards, by being first to slap each jack as it is played to the center.
The Deal:  Deal cards one at a time face down, to each player until all the cards have been dealt. The hands do not have to come out even. Without looking at any of the cards, each player squares up his hand into a neat pile in front of them.
The Play:  Beginning on the dealer’s left, each player lifts one card at a time from their pile and places it face up in the center of the table.
When the card played to the center is a jack, the fun begins! The first player to slap their hand down on the jack takes it, as well as all the cards beneath it. The player winning these cards turns them face down, places them under their pile of cards, and shuffles them to form a new, larger pile.
When more than one player slaps at a jack, the one whose hand is directly on top of the jack wins the pile. If a player slaps at any card in the center that is not a jack, they must give one card, face down, to the player of that card. When a player has no more cards left, they remain in the game until the next jack is turned. The player may slap at the jack in an effort to get a new pile. If the player fails to win that next pile, they are out of the game.

The only changes that I have made is that I’m using a TARGET card instead of a jack.  Also, I’m changing the TARGET card for each hand.  I’ll do this by using a hand-made spinner to determine the TARGET characteristic for each round.