I recently wrote about how I would like to incorporate robotics into my geometry classroom.  I followed all of the classroom robot companies on twitter and started asking questions.  The folks at @OZOBOT were quick to reply and they became one of my top contenders.  Several weeks later, Ozobot tweeted that they were partnering with @Tryazon to sponsor 200 parties.  Of course I jumped at this opportunity and was fortunate enough to be chosen to host.

I have never hosted a Tryazon party before but they are a company that matches innovative new products with potential customers.  As a host, I had to host a party where adults would get to play with and experience Ozobot.  In exchange, I received an Ozobot Starter Pack.  I also received a second robot to give away as a door prize.  Additionally, I was provided with a detailed party planning guide, coupons, and support along the way to ensure that I was able to pull off a successful event. 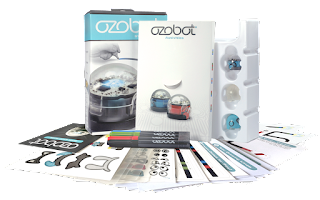 My party was a little different that most I suppose.  Because I want to use Ozobot in an educational setting and because I am planning on applying for a grant to obtain a class set of these little guys, I invited teachers who would be interested in using Ozobot in their classroom as well.  After sharing resources below with about 40 science, math, and technology teachers, I gathered the 5 most interested to play.

Resources:
What is Ozobot?
What can you do with Ozobot?
Are there amazing lesson plans for Ozobot?

I along with the other teachers, were impressed with the wide variety of ways that Ozobot can be programmed (markers, sticker clings, blockly, and java).  We loved the problem solving aspect of the pre-made puzzles.  In addition to the above lesson plans, we also brainstormed how Ozobot could be used to teach topics like probability (basic and dependent), areas, similarity, and congruence for geometric figures, orientation of transformations,  pythagorean theorem, trigonometric functions, uniform circular motion and deriving the value of pi. 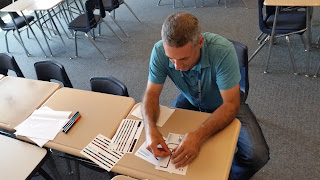 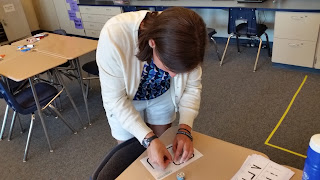 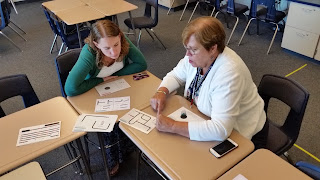 I have two other teachers that are very interested in working with Ozobot, so we may even ask for three classroom sets when we apply for the grant.  If the grant application is successful, I'll be sure to share about future lessons!
Posted by abelje at 6:51 PM