Here is another better late than never #SundayFunday post :) At least this one is only 5 weeks late and I'm making up ground! Here is more info if you'd like to join in the fun.

It's really no surprise that I ended up being a teacher. I had a very difficult childhood. I won't go into the gory details, but although my mother did the very best she could with the resources she had, she could not protect me from everything. My early life was filled with neglect, hunger, inadequate shelter & clothing and abuse. I was surrounded by illegal activities and poor role models.

At school, no one knew what I was going through and no one treated me differently. That is exactly how I liked it. I did not have the means to develop skills in areas like music or athletics, but I could take advantage of my free appropriate education. I quickly learned that if I worked really hard, I would excel, and that is exactly what I did. I loved the feeling of control that I had while studying and achieving success. It was the only place in my life where I could be rewarded for my effort and where I could decide my fate. This is probably why I decided to teach. I knew that there were other students like me and that I wanted to be a part of potentially the only consistent and safe aspect of their lives.

It was not until many years later, as a special education minor in college that I started to notice that I had many symptoms of learning disabilities. I spoke with my professor and she helped me to collect the needed educational records and schedule the necessary testing. I learned that I have a processing disability, namely dyslexia. It was nice to know that there was a legitimate reason that I needed (and still do) to put in 2-3 times the amount of effort as the average person to achieve the same results. Since I was never diagnosed in school, I learned to accommodate for myself. I use these skills daily to get through my day even now.  My biggest benefit from having a learning disability is that I can relate to struggling students.  I can offer suggestions on overcoming challenges that come from real experience.

I was fortunate to land a job as a long term substitute in the same district where I student taught. It was a great first year and provided the supports that I needed both professionally and personally that I needed to transition into adulthood. I'd probably still be in the same teaching position had the lady that I was subbing for not decided to take a second year of maternity leave before resigning. I had to take another job to gain benefits and move myself along as a professional.

I spent the next 13 years in my current position. I have been blessed to meet many wonderful people through my current role. If I had not changed schools, I may not have learned about hybrid learning or standards based grading. I also may never have been pushed to begin speaking at conferences and expanding my PLN to the #MTBoS. All of these ideas have improved my teaching tremendously.
And today, I find myself at another cross roads. I've had a challenging year filled with non-educators making the majority of the instructional decisions in my classroom. I'm currently weighing my options of A) powering through the year and hoping that next year will be better or B) moving on to a position where innovative teaching and learning is appreciated.

This is another very late (6ish weeks overdue) #SundayFunday Post.  I should actually be able to catch-up now that it seems there will be monthly prompts rather than weekly :)  Here is more info if you'd like to join in the fun.

I've been meaning to write a long series of posts about my favorite math games.  In the past, I've written much about practice structures.  In my mind, practice structures are fun ways to practice recently learned skills while games would be more review of slightly older skills.  I'll start with posting my two favorite math review games.  Eventually, I'll follow-up this post with other game summaries.

In general, my favorite review games focus on content, get every student involved, do not reward speed over deep thought, and involve some type of chance.  The first two items on this list are pretty obvious.  Jo Boaler has written much about the harm teachers and schools do to students when focusing on speed in math.  Here is one article explaining the concept and a poster (see the last page) for setting up classroom norms based on Boaler's work.

The reason that I like to involve a chance based component to math review games is that it keeps all students involved.  Sometimes, when one student or teams gets far behind the other teams, they can give-up and start opting out of the game.  I like to use game design that keeps everyone in the game.

My first favorite game is Ghosts in the Graveyard.  Read the previous link for a good explanation of the game.  The short version is that students earn ghosts to place on tombstones by answering review questions correctly.  I even require students to correct their work until they have answered the question correctly before moving to the next question.  I number the questions and teams of 3-4 work on one question at a time, bringing me their solutions to be checked.  If they are correct, I give them a ghost to place on a tombstone.  I mark the ghosts with group numbers.  During the last 5 minutes of class, I stop the game and we calculate scores.  I'll use a random number generator to make each tombstone worth a random number of points.  This means that a team could "win" even if they have fewer ghosts than another team because the ghost placement is based on chance.  This game is also easily adapted for other times of the year.  I've played Pirates on the Sea, Turkeys in the Oven, Flowers in the Garden, and many others.  Here is a pirate version that I made for solving equations in algebra 1 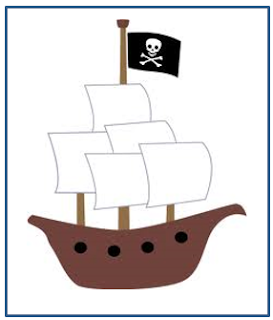 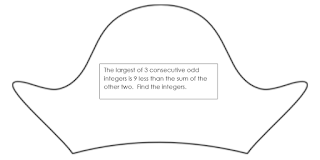 Another game that I like is Risk.  Again, read the linked post first for a clear explanation of the game.  Basically, students start with a certain number of points.  They attempt a question and wager a number of points based on their level of confidence.  The answer is revealed and students add or subtract the number of wagered points depending on whether their solution was correct or not.  Little prep is needed other than having a bank of questions.  I will sometimes pull from the textbook or from a generator like Kuta.  Here is a form that I created for this game.  You could just as easily play the game with no form though.
Posted by Unknown at 3:33 PM No comments:

This is a very late (6ish weeks overdue) #Sunday Funday Post.  I love to read education books and I always learn something new to use in my classroom.  It's hard for me to pick just a few books, so I'll share some of the most recent ones that I've read.

First up: Seven Strategies of Assessment for Learning by Jan Chappuis.

This for a grad class that starts Monday. Getting a jump on the readings... at least I had a few hours of summer break :) @JanChappuis pic.twitter.com/3cqUUdzCKU
— Jennifer Abel (@abel_jennifer) June 9, 2017


This was required reading for a grad class, but it was one of the best books that I've read on formative assessment.  I know that feedback is so important for student learning but often wondered about what it would look like in practice.  This book offers tons of concrete examples.

I made it one of my professional goals for the year to give more formative feedback and fewer grades.  These pointers have helped so far.

One of my biggest take-aways was that the teacher is not the only one that can provide meaningful feedback.  Peer and self feedback can be just as powerful.


I've also rethought my stance on stance on multiple choice assessments.  I think that most of my experience with multiple choice tests has been negative, but I've learned that if the choices are chosen with care, these items can provide great feedback to the teacher.


Additionally, this book encouraged me to reflect more on the strategies that I use for student practice.

Just started reading this book. Leading a book study in the fall and reading it now for a grad class. So excited :) pic.twitter.com/YNuz7mt6ZM
— Jennifer Abel (@abel_jennifer) July 17, 2017


My big takeaway from this book was that I can change the mindset of my students by creating the right classroom environment. 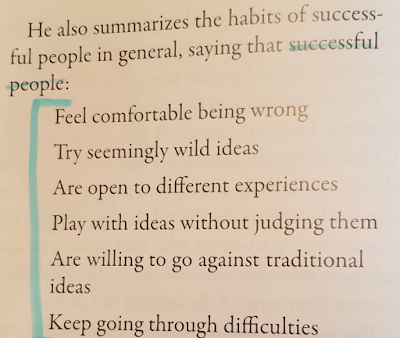 One challenge that I always face is that when I try to create productive struggle, students and parents push back.  They want everything to be easy because they equate ease with intelligence.  I'm so sorry to see that many of my students have never been given the chance to overcome a challenging math task.


This idea is game changing. How old I get parents and students on board at the high school level? @joboaler #MathematicalMindsets pic.twitter.com/1MRBOPI7DL
— Jennifer Abel (@abel_jennifer) July 17, 2017


I also found myself relating to many of the anecdotes in this book.  I've had many parents tell me that they hated math.  Then in the next breath, they tell me that I should be lecturing and giving worksheets every day.  They think that is the best way to learn math :(


One of the most concrete examples from this book are the homework questions.  I am not currently in a position where I can eliminate traditional homework, but I've been using these questions as part of exit tickets.  My students have been very reflective and giving me meaningful feedback about their learning.


One of my takeaways from this book is that I need to do better with honoring student contributions to class discussion, even when that contribution seems very off base.

The book is also filled with several specific lessons as well as general practices that you can use in your classroom right away.  I've used this "around the world" activity several times already.  It's been a hit.


Lastly, this book has driven me to consider more alternative forms of assessment outside of a traditional test.


I hope you consider checking out one of these books :)  They all contributed to my classroom this year!

Posted by Unknown at 2:12 PM No comments: