Modifications to the Theoretical Hybrid Classroom 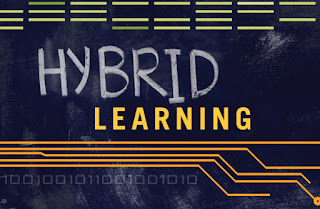 As with any teaching and learning strategy, teachers need to make it their own to get the most out if it.  In this post I’ll describe some of the modifications that I have tried as well as some that I know other teachers have tried.

My classroom during year 1:  I am a rule follower.  When I learned about hybrid learning, I knew that the people who developed it spend tons of time trying different variations.  I understood that the training sessions that I was attending were based on what worked best out of thousands or trials.  Therefore, I tried to do everything by the rules.

So, during the first year, students rotated through all three stations each day.  The problem with this was that I was teaching on a traditional schedule.  I had just enough time to run three 15 minute stations each day.  I had no time for warm-ups or closure.  This really bothered me.  I missed these opportunities to whole class pre- and post- assessment.

One thing that I liked about having all three stations each day is that I could rotate through which group when to which station in which order.  This was good because the more times I taught the same lesson, the better I would get at it.  Therefore, whichever station visited me at the direct station last got the best instruction.  By changing which group started where each day, all of my groups had times when they would see me first, second, or last.  No one group got stuck with my crappy first try every day.

My classroom during year 2:  After determining that I missed my warm-ups and closure, I decided to do only two of the three stations each day.  Another benefit other than warm-ups and exits was that the stations could be a little longer.  During year two I had two stations lasting 20 minutes each day.  The remaining 10 minutes were spent on awesome warm-up and closure activities courtesy of the MTBos.  I’ll write a post about the amazing resources I use her later.

The students that I had for both years all agreed that they liked the second year better.  There were two unintended consequences of this switch though.  First, since I was only doing two stations per day, it meant that it took me 1.5 day to complete a lesson.  The half day was confusing for kids and substitutes when I was out of the building.  To show what I mean, here is a description of the experience of one kid in my class with this set-up:

Day 2 is the tough one.  Half way through class, all of the assignments at all three stations change.  That means there were six different assignments sitting out for students (two at each station).  The students had to figure out which of the two assignments they were supposed to complete.  If I had a substitute, they had to figure out which of the two lessons they were supposed to teach.  It was difficult but with practice and tight directions/communication I was able to make it work.
The second unintended consequence was that I could not change-up the order of which group started at which station like I did during year 1.  So one group always got my first crappy lesson and one group always got my awesome third lesson (until we switched groups, about once every three weeks).

My classroom during year 3:  This coming year I am going to try the following.  I will have two stations per day.  On the day that I am finishing the third station I am going to do a whole class activity during the second half of class.  This is where I will work in my projects.  Instead of having kids struggle through the most difficult assignments without my help at the collaborative station, I will be available to the whole class during this time.  This also allows me to change-up the groups who receive the first/second/last direct instruction lesson.  The only drawback that I see is that it reduces the number of rotations that I can complete over the course of the year from 112 to 84.  This means that each lesson will need to cover a larger number of objectives.  I mentioned in a previous post that I had a goal of reducing the number of objectives that I use in my standards based classroom.  This will be very important to make this more doable for me and my students.

Those the main modifications that I have tried, here are a three quick descriptions of things that other teachers have tried:

For my last post in this series, I’ll be sharing some of the resources that I have used for my independent, collaborative, and direct station activities.

If you are considering a hybrid classroom, I hope that this has given you some ideas for alternatives that might work for you.  Good luck!