For the month of January the folks at Explore MTBoS are challenging you to write one blog post per week.  This weeks challenge is to write about a favorite.  You can read more about the challenge here. 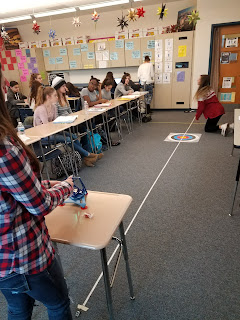 So far this year, my favorite lesson has been Julie's Candy Catapult.  Use the previous link to read about how she created and implemented the activity.  I used the activity over a period of 3 class periods at the direct station in my hybrid classroom.  This worked out to be about 60 minutes total for each student.

First I allowed the students to choice their own group of 3.  I explained that we were going to use this catapult to shoot candy across the room.  Then then would do some calculations so that they could predict where the same candy would land when we shot from the top of a student desk rather than from the floor.

I needed a lot of help from Julie and from the members of our physics department.  I wanted to be sure that I was not misinforming my students.  Students shot 3 Sunkist Fruit Gems from the catapult on the floor.  One student fired the catapult, one student watched the measuring tape to see where the candy landed, one student used their cell phone to time the shot and recorded the horizontal distance traveled by the candy and the time that it was in the air.  They took the average of these 3 trials and used this information to move forward in their project.

Students knew how to write the equation of a quadratic given the x-intercepts.  They used (0,0) and (average horizontal distance, 0).  They used a=-490 for the coefficient.  I had each group distribute and enter their standard form equations into +Desmos.  Julie used this to help students in the next part of their project, but I just used it as a visual check.  Some students distributed incorrectly and ended up with lines or parabolas with negative x-intercepts.  Seeing everyone else's graphs helped them to spot the mistakes. 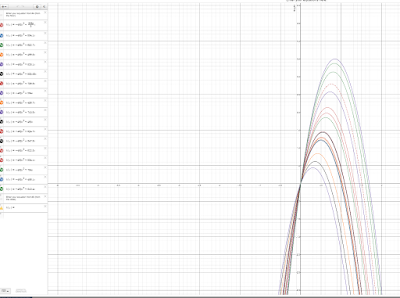 This was the end of the first 20 minute station.  During the next day, students measured the height of the desk, figured out that this would change the y-intercept of their parabolas.  They added this value to their old equations.  Then they used the quadratic formula to solve their new equation for the time when their candy would hit the ground when launched from the desk.  Next they used a second equation to predict the horizontal distance that the candy would travel when shot from the desk.  This was the part that I was unsure of.  I did verify with the physics folks that, ignoring air friction, the horizontal component of the catapult shot was a linear function.  Thus, students could use a proportion relating the horizontal distance and time for both trials.

This is where the second 20 minute station ended. I laminated one of these targets to place on the floor under my measuring tape.  Students slid the target into place based on their predictions and shot three more pieces of candy from the desk.  They recorded the distance from the target that their candy landed each time and recorded their best shot. 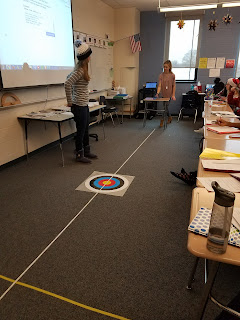 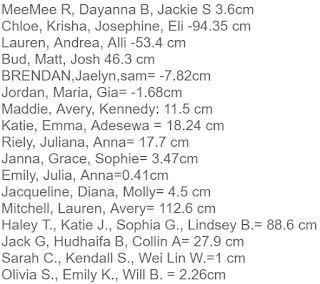 As you can see, some kids rocked it, others, not so much.  We ended with a celebration of our awesomeness and discussed the possible causes of error.   For the last day, we did not use the full 20 minutes.  We used the remaining time to do some review for an upcoming test on quadratics and the eat the candy :)

Here is a link to the student document that I used.  Enjoy!